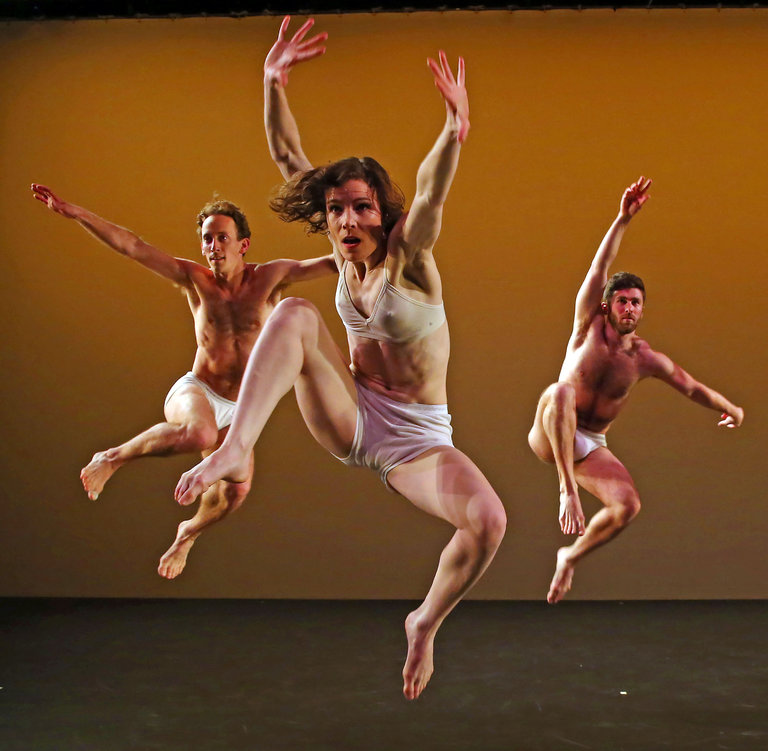 No choreographer alive has built up a stronger reputation for musicality than Mark Morris. In his finest works, he taps both our most primal and our most sophisticated responses to music. That’s not the only reason he has been recognized since the 1980s as one of the very few great choreographers of our day — there are also his exceptional imagination; his phenomenal wit; the profundity of his view of society; his insistence on live music; and his exceptionally honest, natural dancers — but it’s fundamental.

He has also, however, made works in which he seems to trivialize musicality, devising dance effects whose timing and structure seem smart-aleck, pedantic, campy. In these pieces, he shows a tiresome fondness for short-breathed, end-stopped dance phrases that dog the music like a distracting running commentary. This side was predominant on Tuesday, in the quadruple bill at the Mark Morris Dance Studio.

The program contains an unimportant world premiere (“A Forest”), set to one of Haydn’s most amazing piano trios (No. 44 in E). What puzzles further is Mr. Morris’s decision to accompany this with the revivals of two older and yet less substantial works: “Cargo” (2005), set to Milhaud’s “La Création du Monde” (the piano quintet version); and “Foursome” (2002), an annoying exercise for four men that, by alternating between Erik Satie’s “Gnossiennes” Nos. 1, 2 and 3 and Johann Nepomuk Hummel’s “Seven Hungarian Dances,” has a reductive effect on both scores. It seems from these three that Mr. Morris has set out to make his own talent and his musicality look petty. 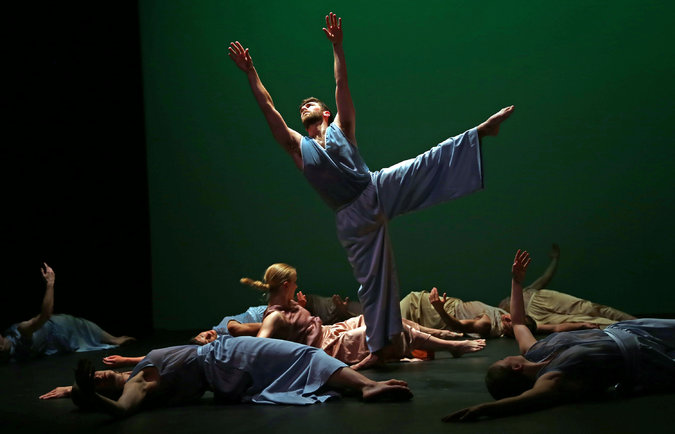 Matters are somewhat redeemed by the New York premiere of the bizarrely named “The.” Set to Max Reger’s beautiful four-hand piano arrangement of Bach’s four-movement “Brandenburg” Concerto No 1 in F (BWV 1046), “The” — new last June at Tanglewood — is often an example of the singular theater poetry that Mr. Morris can conjure. The outer movements show dazzling mastery of richly harmonious geometries, with rings, arcs and lines moving at different speeds. Sixteen dancers fill the stage like a baroque vision of the universe in ideal array.

The second, adagio, movement begins with one man (Sam Black) adjusting his balance on one leg, while other dancers lie flat on the floor, now writhing to the beat, now positioning themselves like sunbathers. The ambiguities keep growing as you watch. At first, Mr. Black seemed like an imperiled voyager amid the realm of the damned. Yet those damned soon started to look comfortably content while he, sometimes pulling others up to join him in his vertical stance, seemed always racked.

This is far from the ceremony that many of us hear in this sublime music, yet Mr. Morris makes you hear its sublimity in new ways. Still, his invention flagged at several points. Even his dancers — so outstandingly fresh as a rule — reflected this by sometimes looking a bit la-di-da, too determinedly gracious for comfort.

Haydn’s Piano Trio No. 44 is an exceptional piece; in “The Classical Style,” Charles Rosen called it “in some ways the strangest of all Haydn’s late works.” The second movement — Mr. Rosen calls it at once Baroque, classical and Romantic — is an astonishing piece of time travel: It looks back at the Baroque as if through the filter of jazz. 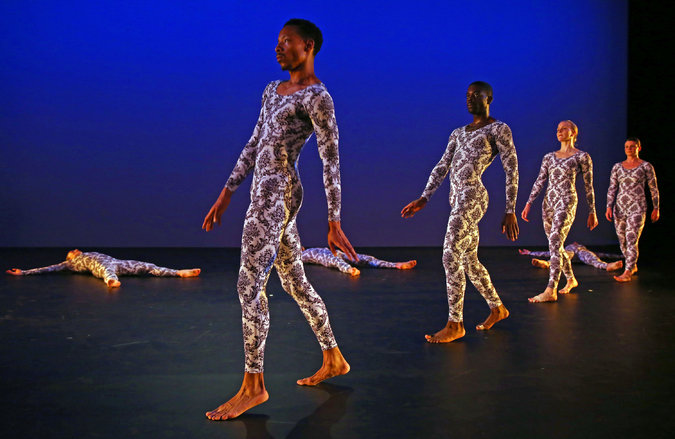 Durell R. Comedy (front) and fellow members of the Mark Morris Dance Group on Tuesday in the world premiere of “A Forest,” set to one of Haydn’s piano trios, at the company’s studio in Brooklyn.CreditAndrea Mohin/The New York Times

Mr. Morris uses nine dancers, in patterned allover tights (designed by the former Morris dancer Maile Okamura) that resemble children’s sleep wear. At first, they stand in three trios, arms stretching upward as if playing, jerkily, at being trees — an image that returns. (The work ends with Domingo Estrada Jr. in a handstand, with his legs stretching upward as if to upend the opening image.) The relentless bass pulse of the second movement prompts some sequences of group walking. The images don’t cohere; Mr. Morris seems to be snatching at ideas.

“Cargo,” by contrast, has real unity, but it’s both earnest and thin, an example of the Expressionistic side of Mr. Morris’s talent at its most labored. It, too, uses nine dancers, all in underwear, with three bamboo poles, which are at times used to suggest the rods from which prey (animal or human) is slung. The jazzy elements of Milhaud’s music are reflected in emphatically chugging pelvises and other shifts of body language.

“Foursome,” the evening’s slightest item, is for four men, variously attired (by Katherine M. Patterson) and wearing shoes. The mood is both formal and playful; we seem to be watching protracted games. One Satie “Gnossienne” is accompanied by a recurrent movement in which all four dancers, standing and facing front, shake their wrists as if to release tension. But what tension have we seen in this laid-back and tepid piece? This wrist shake, recycled as phrases end, is silly, a shtick, like so many Morris motifs. The Hungarian folk elements in Hummel’s music are acknowledged — meters, deportment — but in a dully schematic way, as if being laid out cold on the slab.

A number of the Morris dancers are currently in their primes. I single out Aaron Loux, always the most immediate and immersed member of the group, but it must also be said that Mr. Estrada has now gained remarkable authority, while Mr. Black’s capacity for intensity is riveting. Stacy Martorana, Billy Smith and Brandon Randolph are all models of style. Only in “The,” however, do they have material worthy of them.

Mr. Morris’s musicians are always excellent. Colin Fowler, the group’s music director, is also its first pianist; he was joined at the keyboard by George Shevtsov for “The”; by Georgy Valtchev (violin) and Wolfram Koessel (cello) for “Cargo” and “A Forest”; and by Adda Kridler (violin) and Jessica Troy (viola) for “Cargo.” Now and then in the first three pieces, I took my mind off the dance just to attend to the music. It was startling how much richer the experience became.

A version of this review appears in print on May 19, 2016, on page C5 of the New York edition with the headline: A Mix of Singular Theater Poetry and Tired Verse. Order Reprints| Today's Paper|Subscribe