China may take a break from cutting interest rates

The People’s Bank of China (PBOC) has been relatively quiet on the monetary policy front of late, after seeming to
deliver stimulus on a whim in recent years. That’s disappointing some investors who, having been force fed stimulus
since the global financial crisis, have become near-dependent on continued central bank easing.

To some, the PBOC is falling behind the curve when it comes to delivering necessary stimulus to the broader Chinese economy at a time when it’s growing at the slowest pace in a quarter of a century, raising the prospect of a sharper-than-expected slowdown, or worse, in the years ahead.

This chart, supplied by Credit Suisse, helps explain why many believe the bank could do more to stimulate the economy. It tracks the benchmark one-year lending rate in China, adjusted for producer price movements, against the average “real” benchmark interest rates over the preceding five years. 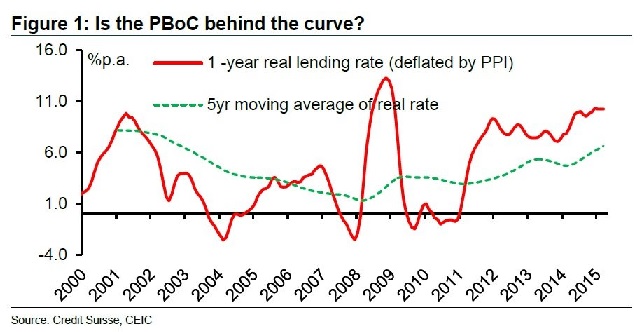 Despite this drag on the economy, Dong Tao and Weishen Deng, research analysts at Credit Suisse, believe that the PBOC is unlikely to turn on the monetary taps on any further in the months ahead, providing six reasons as to why policymakers will favour other mechanisms to stimulate the economy.

Here’s a snippet from a research report released by the pair earlier this week.

We expect this to remain the case over the coming months, despite the market’s apparent wish for more monetary easing, for the following reasons.

While in their opinion the Chinese government, at least on face value, is less concerned about the outlook for the economy than many in financial markets, Tao and Deng are not as optimistic, suggesting that economic growth will decelerate further in the first half of 2016, but not by enough to force the implementation of “an outsized stimulus” from the PBOC.

Though their expectation is that no significant monetary stimulus will be delivered, they believe that a further deceleration in corporate cash flows or non-performing loans, would likely see the PBOC implement expansionary monetary measures again by mid-year. This would also increase the risk of a further renminbi depreciation should that scenario eventuate.