Artur Fischer, Inventor With More Patents Than Edison, Dies at 96 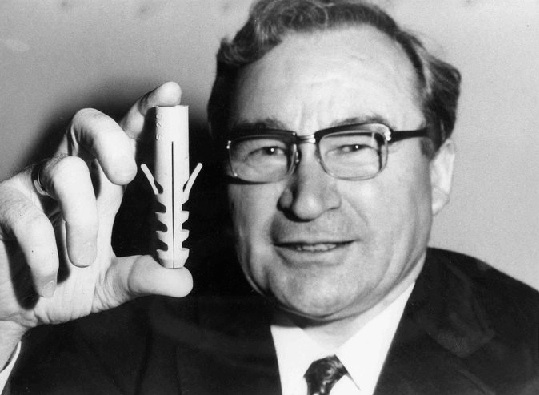 Artur Fischer, a German inventor who registered more than 1,100 patents, including the first synchronized camera flash and an anchor that millions of do-it-yourselfers use to secure screws into walls, died on Jan. 27 at his home in Waldachtal, in southwestern Germany. He was 96.

His death was announced by his company, the Fischer Group.

Mr. Fischer, a locksmith by training and an obsessive tinkerer, came up with his first patented invention in 1947, when he wanted to take pictures of his newborn daughter.

“At the time, you could only use a powder flash for interior shots, which you had to ignite with a cord,” he told the magazine Der Spiegel in 2015. “It was dangerous, and the picture quality was poor because the subject usually blinked at the flash.”

He came up with a synchronized mechanism that triggered the flash when the shutter was released. The device was bought by Agfa, a large camera company, and Mr. Fischer was on his way, coming up with hundreds of solutions to nagging technical problems over the next seven decades.

In 1958, he addressed a problem faced by construction workers and home-repair amateurs alike: how to insert a screw securely into plaster or drywall. He devised a nylon plug with a split tip to be inserted into a drilled hole. As the screw turned, the plug prevented it from dislodging the plaster. As the screw advanced toward the tip, the anchor expanded, pressing tightly against the hole. Two anti-rotation fins on the plug wedged into the plaster, keeping the anchor securely in place.

This was the proverbial better mousetrap, a major improvement from the hemp-filled metal anchors then in use. Today, about 14 million of Mr. Fischer’s plugs are produced every day around the world.

“What Bill Gates was to the personal computer, Artur Fischer is to do-it-yourself home repair,” Der Spiegel wrote in its interview.

“I am interested in any problem to which I can provide a solution,” Mr. Fischer told the German magazine Technology Review in 2007.

His total number of inventions put him just ahead of Thomas Edison, who had 1,093 patents to his name. In recognition of Mr. Fischer’s work, the European Patent Office gave him a lifetime achievement award in 2014.

Artur Fischer was born on Dec. 31, 1919, in Tumlingen, now part of Waldachtal. He was the son of a tailor. His mother, who ironed collars to make ends meet, recognized her son’s mechanical aptitude and encouraged him at every turn, helping him set up a workbench at home and buying him the German equivalent of an Erector Set.

Artur attended a vocational school but left at age 13 to serve an apprenticeship with a locksmith in Stuttgart, Germany. He joined the Hitler Youth and enlisted in the military with the hope of becoming a pilot, but he was nearsighted, short and lacked a high school diploma. He was trained as a mechanic for the Luftwaffe and was assigned to a base in the Palatinate region, where Adolf Hitler paid a surprise Christmas visit in 1939.

“I had made a model airplane to give my mother as a Christmas present,” Mr. Fischer told Der Spiegel. “Then my commanding officer said that I was the best mechanic and I should give the plane to Hitler. It was a horrible time.”

Mr. Fischer survived the Battle of Stalingrad, leaving on the last plane, and later in the war was captured in Italy and sent to a prisoner-of-war camp in England. After returning to his hometown in 1946, he found work as an assistant at an engineering company and began making lighters and loom switches out of military scrap. In 1948, he founded his own company, the Fischer Group, which today has 42 international subsidiaries, employs 4,000 people worldwide and sells its 14,000 products in more than 100 countries.

In Germany, Mr. Fischer is famous for his Fischertechnik kits — sets of nylon blocks with electric motors and photosensitive cells that schoolchildren and hobbyists have used to make machines and robots, and engineers have used to model prototypes. The first kits were given to clients in 1964 as Christmas gifts, but they were so popular that they were sold to consumers the next year.

Many of Mr. Fischer’s humble inventions led to spinoffs. He applied the principle of his wall plug, for example, to create a series of surgical plugs to hold broken bones together.

Mr. Fischer’s wife, the former Rita Gonser, died in 2013. He is survived by a son, Klaus, and a daughter, Margot Fischer-Weber.

One of Mr. Fischer’s most recent inventions is a gadget that makes it possible to hold and cut the top off an egg of any size. He got started on the problem when a hotel owner complained to him that his guests, on opening their boiled eggs for breakfast, always made a mess — the year was 1946.

A version of this article appears in print on February 9, 2016, on page B12 of the New York edition with the headline: Artur Fischer, 96, a German Tinkerer With More Patents Than Edison, Is Dead.
Order Reprints | Today's Paper | Subscribe