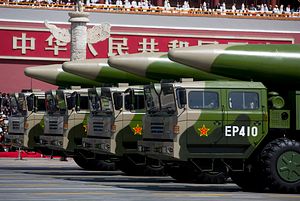 The rift between the United States and China threatens to become a chasm. Barely a day passes without some tit-for-tat exchange of barbs, accusations, or actions designed to make life difficult for the other country or to trumpet the superiority of their respective political systems.

In response, China’s Foreign Ministry branded U.S. criticism of its Uyghur policy as “baseless” while bluntly telling Washington to butt out of Hong Kong affairs. Beijing had earlier withdrawn the press credentials of journalists at three leading U.S. newspapers and threatened to put American companies on a list of proscribed foreign entities.

This rapid descent into conflict has taken many by surprise. For most of this century, Sino-U.S. competition was moderated by the need to work together on a range of global economic, financial, and geopolitical issues that mandated cooperation. But these cooperative impulses have almost entirely disappeared, exacerbated by recriminations over responsibility for the coronavirus pandemic, which has exposed the depth of their mutual mistrust.

Beijing thinks Washington is bent on containing China to prolong the declining power of the United States while denying China its rightful place in the sun. Americans increasingly believe that Beijing is threatening U.S. security interests, undermining its prosperity, interfering in its democracy, and challenging its values. Anti-China sentiment unites an otherwise divided and partisan Washington.

A common misperception is that mounting differences over trade and technology are primarily responsible for the spike in hostilities. But while important in themselves, the U.S.-China trade and tech wars are symptomatic of a deeper and more dangerous geopolitical divide rooted in their clashing strategic ambitions and contrasting political systems.

For U.S. President Donald Trump, the contest with China is about redressing perceived inequities by leveling the trade and tech playing fields and consolidating the U.S. position as the paramount global power. China’s Xi Jinping, too, wants to correct past injustices and grasp his carpe diem moment to return China to its “rightful” place as the dominant state in Asia and eventually the world. Time is running out for Xi to achieve this ambition and escape the middle-income trap because of demographic decline, falling productivity, and a mounting global pushback against his assertive foreign policy.

The shift from cooperation to strategic rivalry has triggered an intensifying debate about whether the world is on the precipice of a new Cold War. Skeptics refute this, but they are wrong.

There are, of course, significant differences. China has supplanted Russia as the main threat. Strategic competition between the United States and the Soviet Union largely played out in the political and military domains; there was little trade between the two competing blocs. But the main contest between the U.S. and China is economic, which means that trade, investment, technology, and strategic industries are central to today’s rivalry.

At its high point, the GDP of the Soviet Union was only 40 percent of that of the United States’. But China’s is already at 65 percent and growing rapidly. Between them, the U.S. and China account for around 40 percent of global GDP. If either of these two titans sneezes, the rest of the world catches a cold — literally, in the case of China, as the impact of the coronavirus continues to lay waste to the health and prosperity of millions.

Although the new Cold War is playing out across the world, its geographic center of gravity is the Indo-Pacific, not Europe, because the epicenter of global commerce and trade has moved from the Atlantic to the Pacific, reflecting Asia’s rise and Europe’s decline. The United States and China are both Pacific powers, so their rivalry will be felt most keenly in the Indo-Pacific, particularly at sea, where their interests collide and there are several potential triggers for military confrontation.