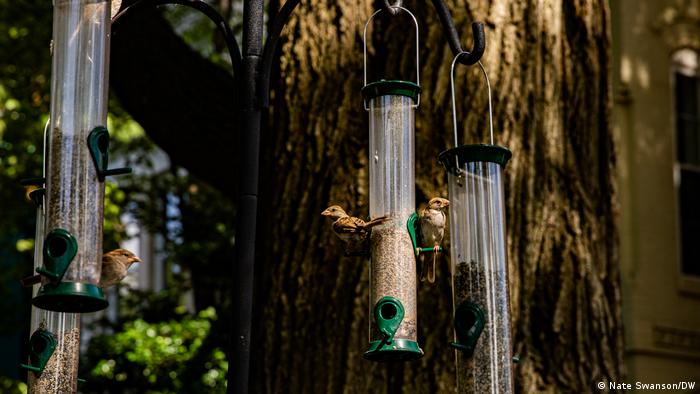 There's a new epidemic, this time among birds. An illness is infecting them in the US capital ― and it's spreading. Experts say the cause is unknown.

While humans and other animals continue to grapple with COVID-19, a new epidemic seems to have hit multiple bird species in North America.

Across the United States, people have been finding dead birds. The birds appear to have been hit by a wave of mysterious illnesses since April.

Ornithologists (bird experts) say the dead or ailing aviators tend to have swollen eyes as well as neurological issues that seem to be causing the birds to lose balance.

Monsma has worked in animal protection and rehabilitation within urban areas for 25 years, especially in the D.C. area.

But it took Monsma and his colleagues a while to realize that what they were seeing was "not usual."

Looking for the cause

They now think that multiple bird species have been contracting an odd illness for about two months. And the illness has spread at least 965 kilometers (600 miles) from the capital, across the Midwest regions of the United States and into the state of Indiana.

The United States Geological Survey (USGS) published a report on the mysterious bird deaths in early June. Details remain hazy, but experts are trying to trace the epidemic back to its origins.

"The first one we saw was in April. In the beginning of June, that's when we started sending birds to an animal center, where they were alarmed to hear our numbers at the time. Now, we're up to just under 200 that are infected," Monsma says.

Animal centers have been examining the birds for a possible cause of death or illness, but tests have been inconclusive so far.

"West Nile [disease] is ruled out. . . Everything has been ruled out. To date, we still do not know," says Monsma, citing tests conducted by Wildlife's clinic director, Cheryl Chooljian.

The USGS is just as baffled by the epidemic.

"At this point, the USGS doesn't have updates beyond the interagency statement," says Marisa Lubeck, a spokesperson with the department.

Theories for the illness

Experts do still have their theories. And one of them links the disease with the arrival of Brood-X cicadas that made their appearance around late April to early May — the same time people started to notice the dead birds.

It's just a theory, but it is something to work on, according to ornithologists. And continued research is important because another bird flu could prove very dangerous for people as well.

"We are losing our population of birds at an alarming rate," says Monsma, including Fledglings, European Starlings, Bluejays and others.

"About a third of the species in America are decreasing rapidly. It's spreading to other species," he says. "And we certainly cannot rule out the possibility that it might spread to humans."

He says that historically and currently "when you see an outbreak among animals, it's a cause for worry. It's something you don't want to dismiss."

There is some hope for the winged creatures ― the amount of sick birds reported to City Wildlife has gone down over the past two weeks. To eliminate the spread of the disease among various species, Monsma says City Wildlife has informed D.C., Maryland and Virginia to take precautions and take down bird feeders or bird baths. Some residents have already gotten rid of their feeders, while others have taken another route and attached bird skeletons to them to ward off birds that regularly come to visit.

The United States Geological Survey advises to cease feeding birds until the epidemic is over. If feeders and bird baths are kept, they are to be cleaned with a 10% bleach solution. Pets are to be kept away from sick or dead birds.

But even with the numbers of infections decreasing, there is no end in sight yet. Experts say the public can help by sticking to the cautionary measures in order to contain the illness before it is too late.