Magnetic and topological order united in a crystal 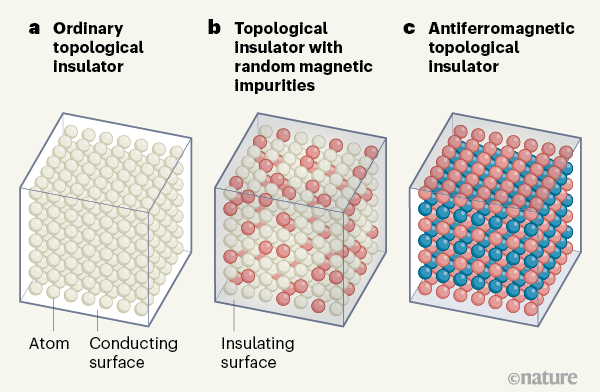 A material that has electrically conducting surfaces has been found to show, when cooled, a type of magnetic ordering that reduces conduction at the surfaces. Such remarkable behaviour could have practical applications.

An ordered arrangement of magnetic moments in a material normally prevents the formation of another kind of electronic order associated with an exotic state of matter known as a topological insulator. But Otrokov et al.1 and Rienks et al.2 report in Nature that manganese bismuth telluride integrates these two types of electronic behaviour. The complex layered structure of alternating magnetic and topologically non-trivial regions in this material leads to an intriguing and potentially technologically useful interplay between magnetic and topological order.

One of the earliest descriptions of electronic order in solids was of ferromagnetism, the existence of which was reported in natural minerals in Greece and China more than 2,000 years ago. In a simple ferromagnet, microscopic magnetic moments, arising predominantly from the spin (intrinsic angular momentum) of a material’s electrons, align in the same direction, leading to an overall macroscopic magnetic moment. The concept of antiferromagnetism, in which spins align in alternating directions and the average magnetic moment is zero, was developed only in the 1930s. These two kinds of magnetic order are viewed theoretically as breaking time-reversal symmetry: when the direction of time is reversed, the pattern of spins is changed. Time reversal acts by reversing velocities (a bit like running a movie backwards) as well as by reversing the direction of angular momenta, including spins.

However, unbroken time-reversal symmetry is required to produce topological insulators, which have been a tremendously active area of study3,4. Topological insulators have an electrically insulating interior, but a conducting surface. The property that sets them apart from ordinary insulators is that their surfaces cannot be made to have a simple insulating state as long as time-reversal symmetry is unbroken.

This makes topological insulators ideal platforms for generating excitations known as Majorana zero modes, which are the basis for a topological approach to quantum computing5.The two current papers demonstrate that crystalline manganese bismuth telluride manages to combine these seemingly incompatible magnetic and topological orders. When cooled, the material becomes magnetic, and yet displays a kind of topological insulating behaviour. Unlike an ordinary topological insulator, for which every surface is conducting, such an antiferromagnetic topological insulator has surfaces that are conducting or insulating, depending on how the specific surface cuts through the alternating pattern of spins6

Otrokov et al. carried out numerical simulations in conjunction with various experimental probes of manganese bismuth telluride. On the basis of the results, they argue that the material has both an antiferromagnetic order and a band inversion (whereby the usual ordering of electron energy bands is flipped), which is a signal of a topological insulator. The authors used a method known as X-ray magnetic circular dichroism to confirm the magnetic ordering experimentally.

In addition, these authors used a technique called angle-resolved photoemission spectroscopy to study the electronic structure at the material’s surface. They observed that a structure in the surface electron bands, known as a Dirac cone, is modified near and below the temperature at which the material becomes antiferromagnetic. This Dirac cone is the distinguishing feature of the surface of a topological insulator, and its disappearance is a sign that the surface has been converted from conducting to insulating.

Rienks et al. carried out detailed studies of the atomic and electronic structure of bismuth telluride to which varying amounts of manganese had been added through a process called doping. They found that a small amount of doping (about 6% manganese) turns the topological insulator into a ferromagnet (as opposed to the antiferromagnet seen by Otrokov et al.). Rienks and colleagues also observed a tendency of doped bismuth telluride to form septuple layers, similar to those in crystalline manganese bismuth telluride, but separated by standard, quintuple layers of bismuth telluride. In addition, they studied manganese-doped bismuth selenide, which might have been expected to behave in the same way as its telluride counterpart, given that these compounds are similar topological insulators.

Rienks et al. found that manganese added to bismuth selenide does not have as strong a tendency to form layers as it does in bismuth telluride, and they showed that this structural difference has consequences for the magnetic structure and surface electrons. The telluride compound has a gap in energy between surface electron bands and has a magnetization that is perpendicular to the plane of the surface. By contrast, the selenide compound does not have this gap and has in-plane magnetization. The energy gap in the telluride compound disappears when the temperature is raised above the magnetic transition temperature. This connection between the energy gap and magnetism has been challenging to observe in other materials and samples.

A notable requirement for an antiferromagnetic topological insulator is that whether a surface has gaps (insulating) or does not (conducting) depends on the surface termination of the 3D crystal. This difference could be seen by producing other surfaces, or by looking at steps on a surface using scanning tunnelling microscopy. The combination of magnetic and topological behaviour observed in the current papers could lead to new spin-based electronic devices, because the topological aspects might, for example, improve how materials transport spin currents. There is an overlap in potential applications with a topological phenomenon called the quantum anomalous Hall effect (QAHE), which is generated using magnetic impurities in thin films of topological insulators10,11. Steps on the surface of an antiferromagnetic topological insulator produce the same perfectly conducting edge channels as in the QAHE.

The fact that manganese bismuth telluride is intrinsically magnetic, rather than having its magnetism result from randomly located impurities, as in current QAHE materials, could be advantageous. Key questions remain about how the magnetism varies between different samples of this material. In particular, it seems that both the magnetic transition temperature and the nature of the magnetic ordering between planes could vary, and that an applied magnetic field might be used to switch this ordering. At a more fundamental level, antiferromagnetic topological insulators are predicted to support, without applied electric or magnetic fields, a quantized electromagnetic response (one that comes in discrete units), known as axion electrodynamics6. The current papers show how the synthesis and theory of crystals that have various symmetries combine to reveal important types of electronic order.